Images And Descriptions Of The Approved Miniature Schnauzer Colors 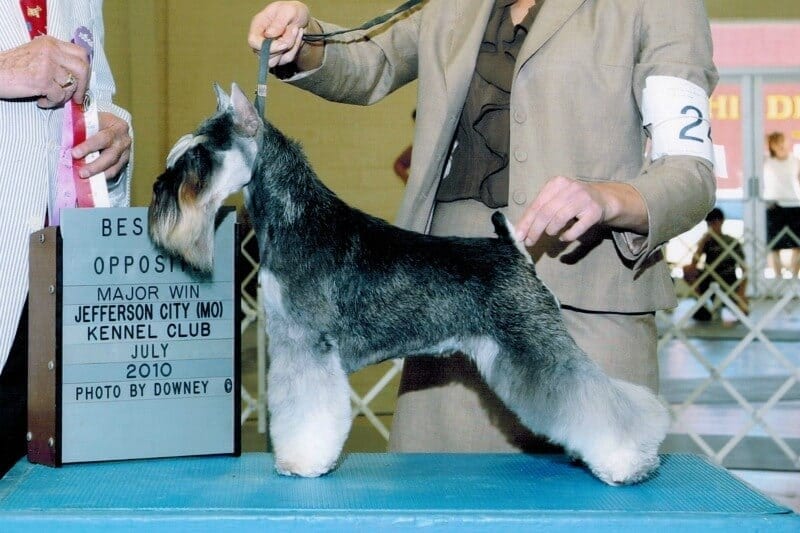 The Salt and Pepper Miniature Schnauzer is the most common color for the breed. In fact, when the breed was first registered in the US “salt and pepper” was the ONLY officially recognized color allowed.  The Salt and Pepper is genetically of a “banded” coat color. The outer guard coat hairs are banded in shades ranging from light silver through grey to black, often ending in black hair tips. There is a lot of variation in shading and depth of color from dog to dog.  The color on the body is darker than that of the “furnishings” of the legs, vent, beard, eyebrows and brisket. That is because of the action of the Schnauzer’s chinchilla gene which causes these areas to be lighter.  Then there’s the undercoat which can also be any shade, from silver to almost black. The color of the undercoat becomes most apparent when the dog is clipped.  As a result of all this variation, the Salt and Pepper can range from a dark, nearly black dog to a pale silver dog, and even seem to “change color” when it is clipped! 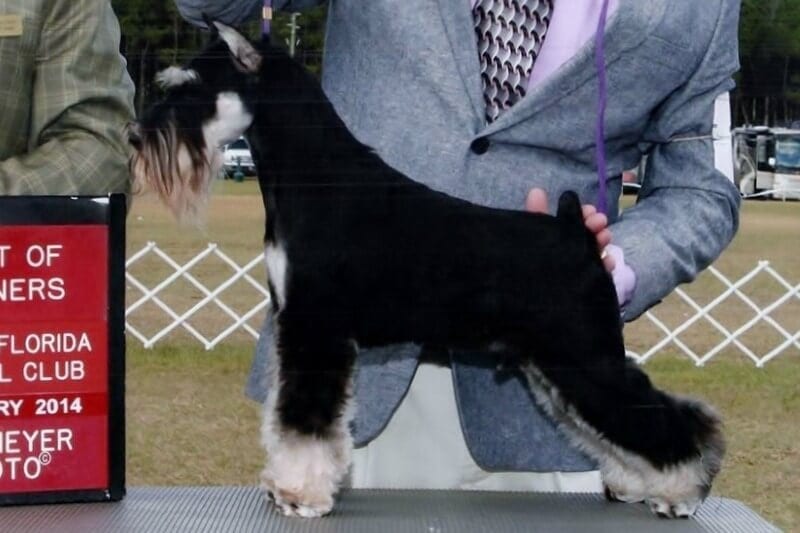 The markings of a black and silver Miniature Schnauzer follow the same pattern as the salt & pepper Schnauzer, except both the topcoat and undercoat are solid black. Beautiful silver white color accents areas of face (beard and eyebrows) and on legs, feet, and furnishings. 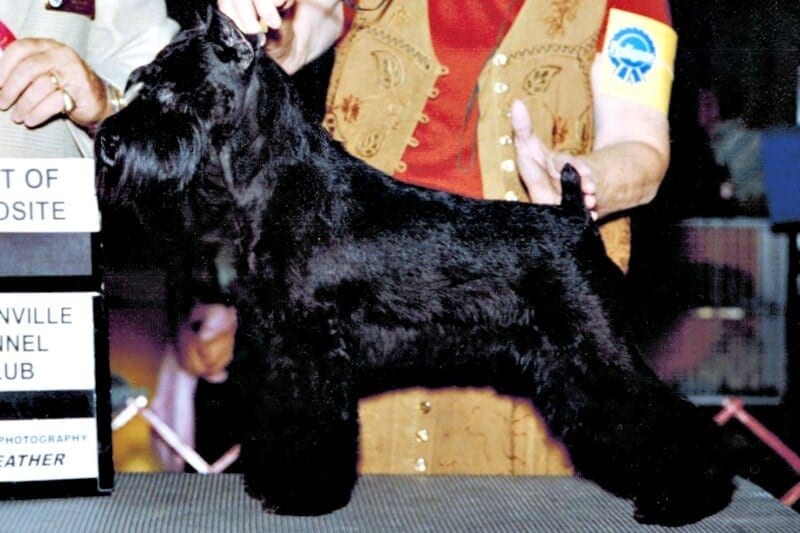 Just as the description implies, an entirely black Miniature Schnauzer from head to toe to wiggly butt. However, the solid black Schnauzer may sometimes have a small white chest patch.

The white Schnauzer is one of four color varieties of the Miniature Schnauzer currently recognized by the Federation Cynologique Internationale. However, they are not accepted for conformation showing by the American Kennel Club and Canadian Kennel Club. The controversy rests on the disputed origins of the white variation: whether it was contained within the genes of the originally recognized breed, or whether it was the result of subsequent modifications. Since the other two Schnauzer types have never been available in a white variation, and the original German standard never included white as an acceptable color, the American Miniature Schnauzer Club (AMSC) chooses not to recognize white.

I frequently receive inquiries and questions in regards to the white miniature schnauzer.  Very often back-yard breeders will label or advertise  the white miniature schnauzer as a “rare” form of the breed.  White is certainly NOT a desirable color for this breed and any breeder who disagrees is misleading the general public.  While it is true that some other countries have formulated very different breed standards from the United States that do allow white.  Reputable breeders in the USA and Canada follow the North American breed standards as  the guidelines for the breed’s development here.

Responsible breeders work towards the improvement of the breed. They respect the Standard as the “blueprint” of what the breed is designed to be, and within that framework, they develop their own “lines”, or “recognizable type”.  Breeders who deliberately depart from the Standard do so for their own reasons, just as some will deliberately breed crosses to other breeds. While some may legitimately seek to develop “new” breeds, or have a preference for other Standards, some have other motivations. Beware of anyone who suggests that these crosses or “rare” departures from the Standard are in any way more “valuable”.

Breeders who advertise white or parti-color miniature schnauzers are backyard breeders who have substandard breeding stock.  Quite often is the case, these breeders have purchased their breeding stock from unethical pet breeders who know nothing about the miniature schnauzer breed and are doing great harm to the breed they profess to love.    Many breeders try to legitimize their breeding practices of producing off colors by stating that these colors have been around since the beginning of the breed.  While this may be true to some extent, these breeders fail to mention that these undesirable colors were a byproduct during the early stages of development for the miniature schnauzer breed.   Once the desirable gene pool was achieved for producing a more uniform breed, these off colors quickly disappeared from reputable lines of linage.  Today, these undesirable  colors and characteristics are only prevalent in breeder lines who chose to replicate these undesirable genes by completely disregarding the Miniature Schnauzer Breed Standard.   It is true that these poorly bred miniature schnauzers are allowed to be registered with the American Kennel Club, however they are excluded from AKC conformation shows.  The reason for this is simple, AKC conformation shows only promote correct breed type and all others are excluded from competition. 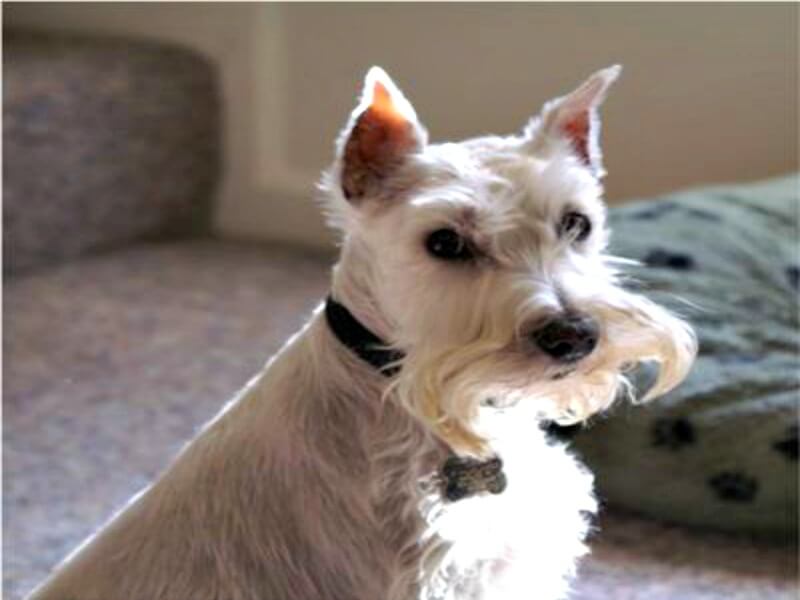 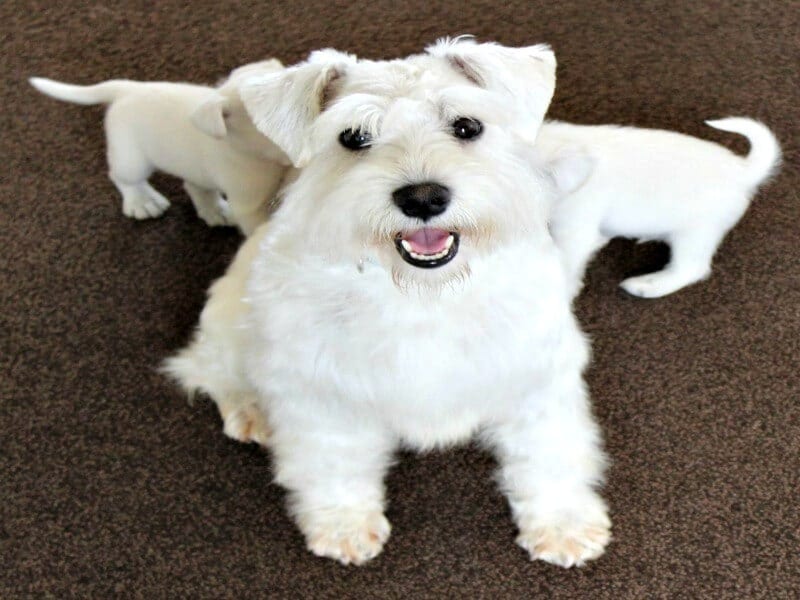 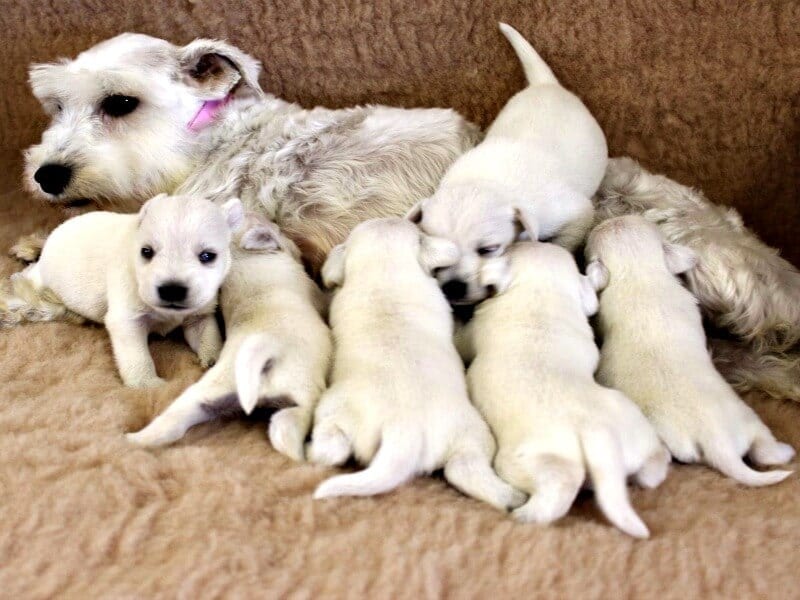 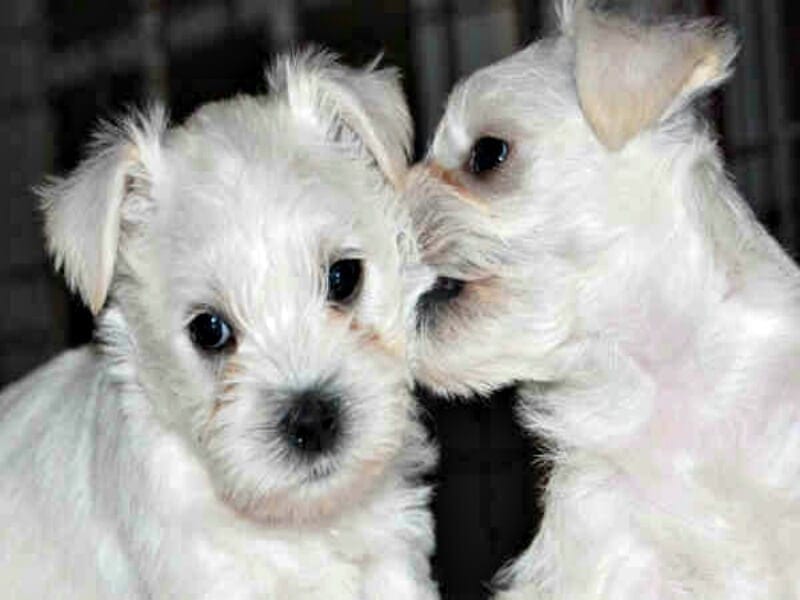 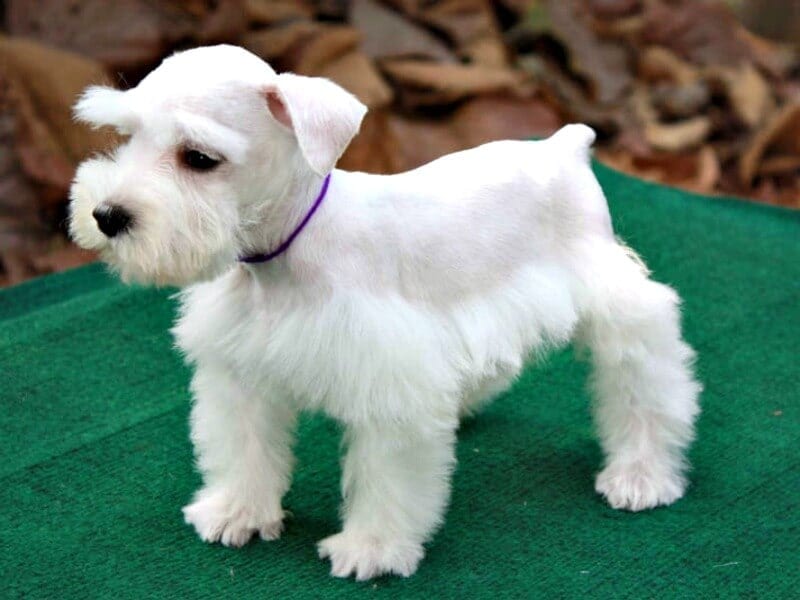 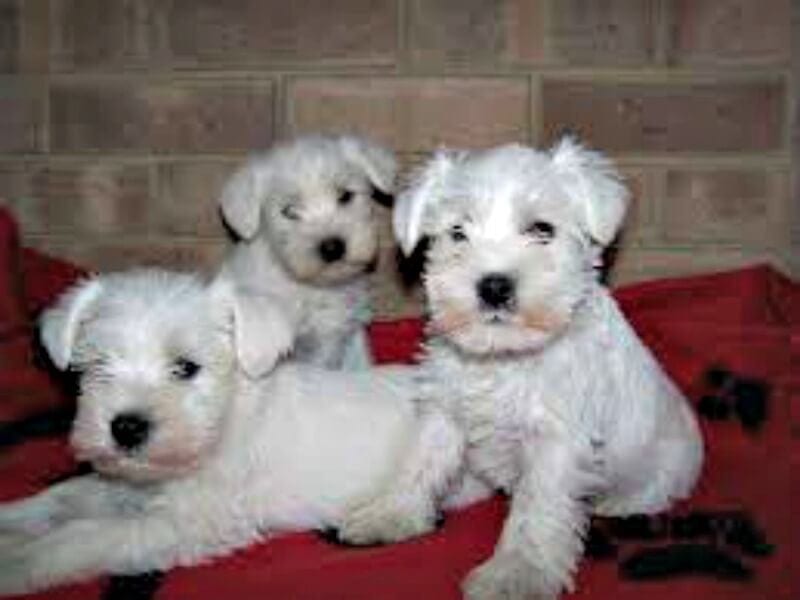 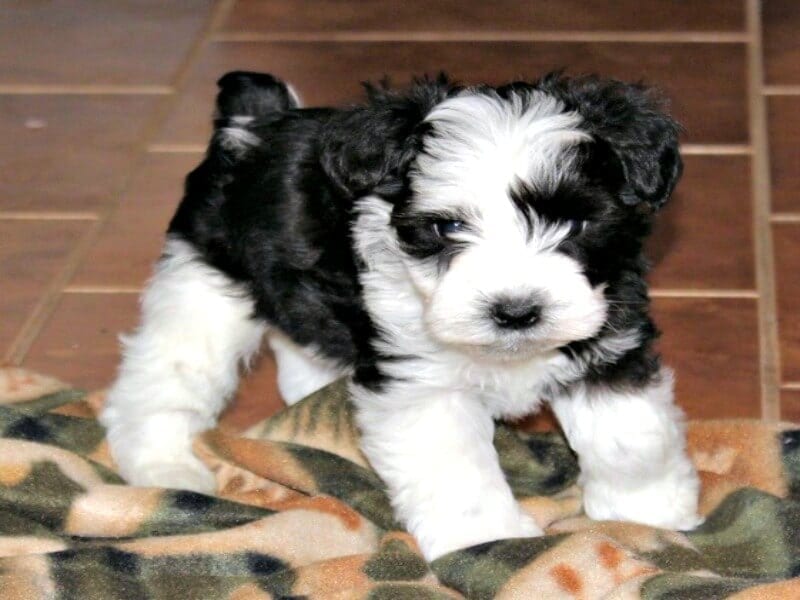 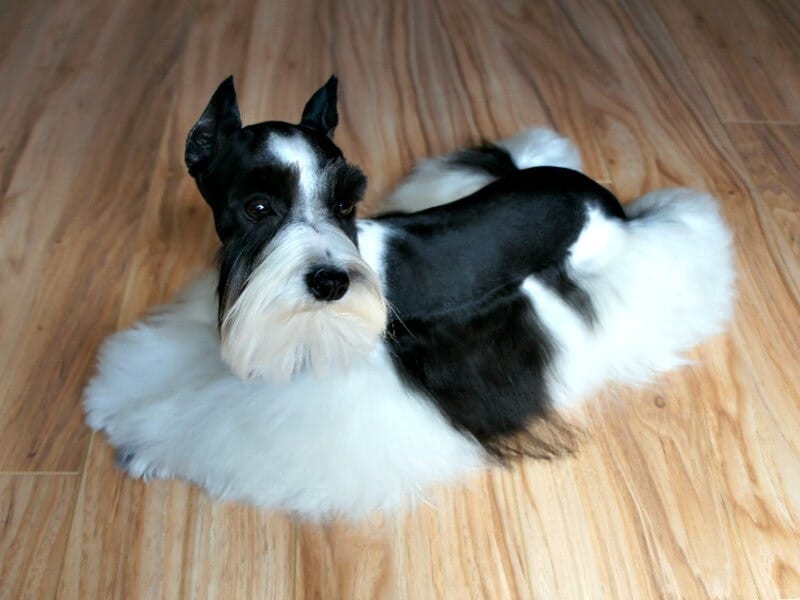 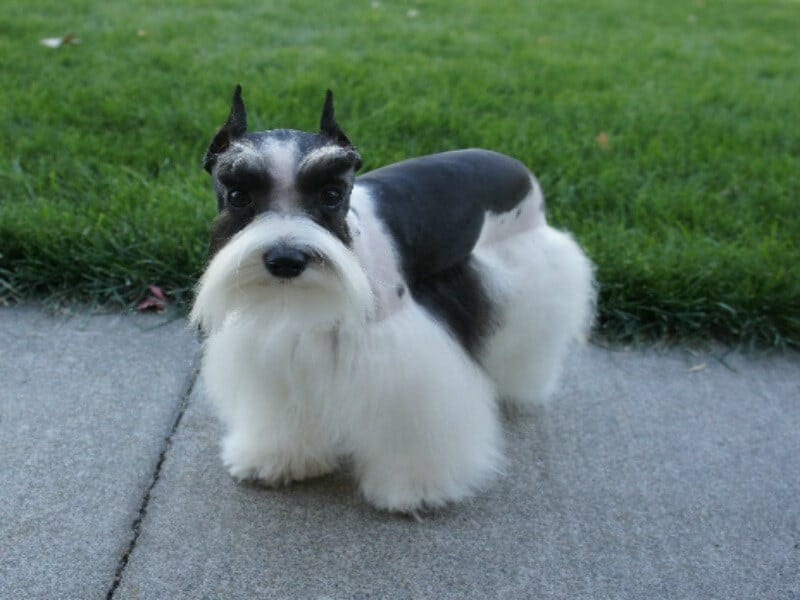 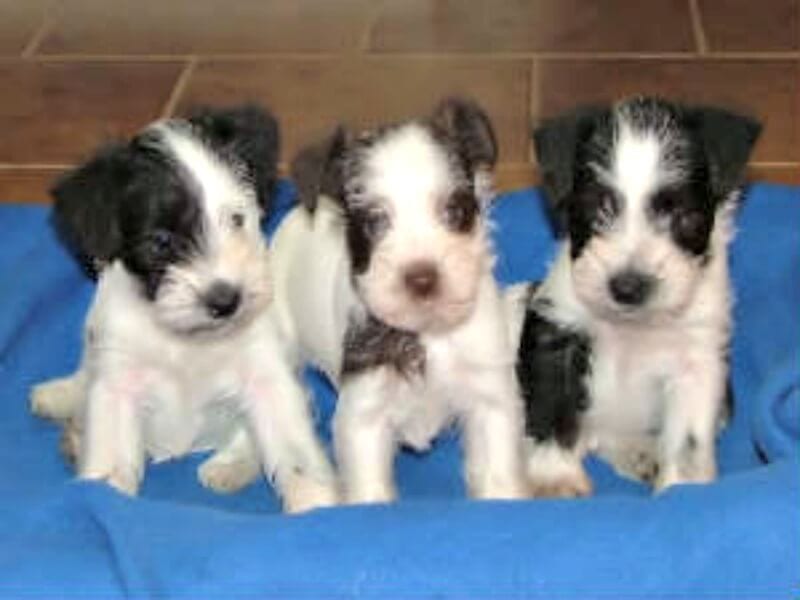 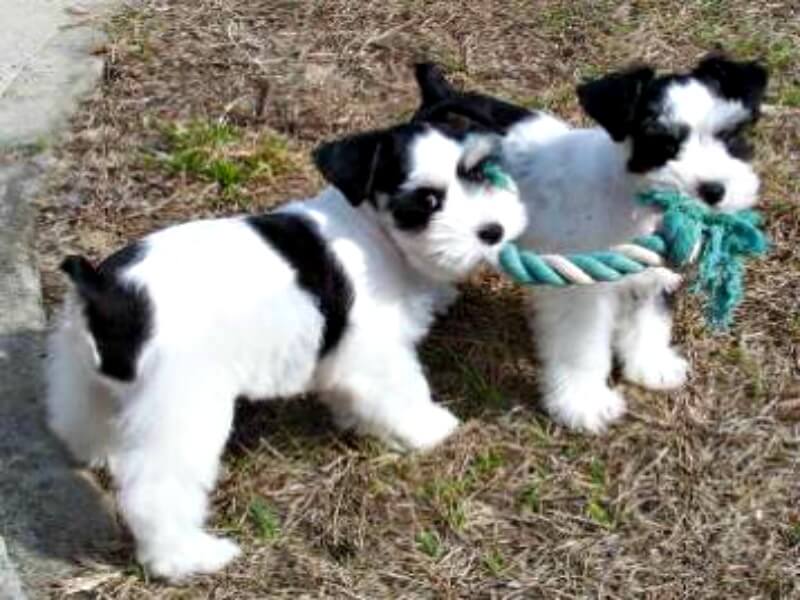 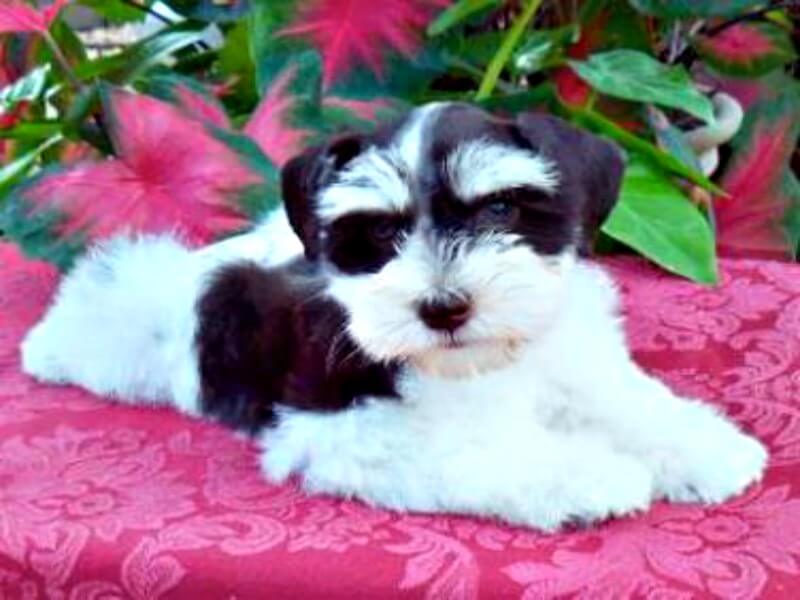