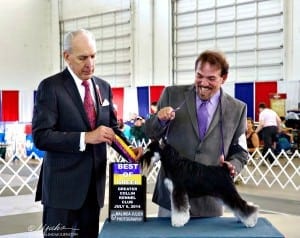 I was first introduced to the Miniature Schnauzer in Omaha, Nebraska by my mother’s friend, who raised and showed the breed.  My mother begged him for a puppy and he finally agreed to sell us one.  I named my first miniature schnauzer TJ, and he was the most beautiful dog I had ever seen.  TJ lived like a king in our house because we all knew how special he was.  I really enjoyed bathing, brushing and grooming him.  I would take him around the neighborhood showing him off in all his glory, all of the time.  I will never forget TJ as he brought me so much joy while I was growing up.  Since then I have owned many miniature schnauzers, but none of them have ever compared to TJ in conformation or temperament.  I could not understand why various miniature schnauzers I have seen or purchased were ever of the quality of TJ.

In 1994 I purchased a black female and a salt and pepper female from a pet breeder.  In 1996 I began breeding my two females, and had three litters.  I would sell the puppies to good homes, but never was satisfied with the quality of the puppies.  I kept thinking back to how beautiful and close to perfect TJ was  and I wanted to do better.  I started researching the Miniature Schnauzer Breed and learning as much as I could about this breed.  I came across The American Miniature Schnauzer Club website and was astonished to learn everything I had been doing was wrong in my breeding efforts.  I began calling various miniature schnauzer breeders listed on The American Miniature Schnauzer Club’s website, and began getting to know them and started attending AKC Conformation dog shows. It was at these dog shows I started seeing the quality miniature schnauzers  that I  had  been longing  for.   I purchased my first  male show dog (Justin) from Virginia (Ginny) Rice, who had been a top miniature schnauzer breeder and handler of the miniature schnauzer breed.  I was going to let Ginny show Justin for me, but the more shows I went to the more I wanted to show him myself.  I expressed my goals to Ginny, who gave me her blessing to show Justin by myself, and she told me that she would be there to mentor me as needed.  I quickly began traveling all over the country showing Justin to many of the top judges of the miniature schnauzer breed.  I finished Justin, getting back to back majors in Oklahoma City, OK.  This was a difficult task, but it was well worth the effort to me.  I have since bred other champions and I continually strive to improve upon my breeding program.  My goal, as well as the goal of other reputable AKC Miniature Schnauzer breeders, is to improve upon the quality of the breed, endeavoring to get the closest to the Miniature Schnauzer Breed Standard, than any other dog in the past has been.

I love raising miniature schnauzer puppies and I attempt to socialize them early.  My puppies are raised in my home, not outside or without human contact.  I spend many hours with my puppies, holding, petting, and caring for their needs.  I let the puppies run around my home to get their exercise (supervised of course.)  I also let my young niece and nephews hold and play with the puppies so that the puppies will be accustomed to children.  I also start the house breaking process as soon as they are old enough to learn, to make it easier on their future human companions.  All this makes my puppies grow up to be well adjusted happy animals, that are a joy to every one who meets them.  They have the best temperaments of any dogs I have ever seen and I know you will agree as well.  Reberstein’s Miniature Schnauzers has an outstanding  reputation and history of  producing the finest  miniature schnauzers in the world.  Reberstein’s Miniature Schnauzers ranks as on of the most reputable and top-rated miniature schnauzer breeders in the United States.

I would also like  to give special thanks to Kurt Garmaker for mentoring me through the years about all aspects of the Miniature Schnauzer breed.  Without him…..none of my accomplishments and endeavors would have been possible.

About The Breeders was last modified: October 17th, 2018 by Dennis Gorrebeeck